VST plug-ins running in Pro Tools, thanks to FXpansion's adaptor. 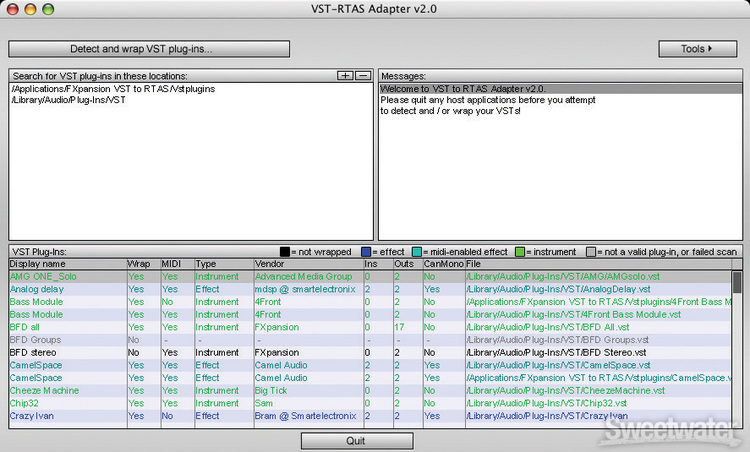 As the name suggests, FXpansion's utility allows VST effects and Instruments to be used in Pro Tools, but how well does it really work?

Both Pro Tools LE and TDM systems use Digidesign's proprietary RTAS (Real-Time Audiosuite) format for host-based plug-ins. While this supposedly keeps Pro Tools ' mixing environment within Digidesign's sphere of influence, it has limited the range of virtual effects and instruments available to Pro Tools users. The situation has been improved by Rewire support, as well as Native Instruments' adoption of RTAS, but there is still a great number of VST-format plug-ins (many free) that we've missed out on. It seems quite hard to believe, but FXpansion's VST To RTAS Adapter can take VST effect and Instrument plug-ins and alter them so that they work as RTAS versions. (They also have a VST To Audio Units Adapter, for OS X users of Logic who want to incorporate VST plug-ins.)

What FXpansion's adaptor does is 'wrap' the plug-ins in an extra layer of code that mediates between Pro Tools and the plug-in, making the plug-in appear to Pro Tools as if it was in the RTAS format. This 'wrapping' takes place off-line, using a configuration application, and once it's complete, FXpansion claim that the adaptor code uses next to no CPU power, so the plug-ins should be nearly as efficient as in a native VST host like Cubase. No extra background programs have to be running when you use the converted plug-ins — they just appear in Pro Tools alongside your existing effects.

VST plug-ins are converted prior to use with the Configuration Utility.Installation creates a folder containing the VstRtasConfigure utility and a local VST plug-ins folder. The Configure application scans your computer for VST plug-ins, creates the 'wrapped' versions and places these in your Pro Tools Plug-ins folder. Even with a large number of plug-ins this only takes a few seconds. After this, you only need to use the utility when you add new plug-ins, or wish to remove them all. The important option in VstRtasConfigure is the 'Scan only local VST plug-ins' toggle. While the utility can scan your whole computer and convert any VST plug-ins it finds, it's highly recommended that you copy the ones you wish to use into the local folder. The best method is to convert in small batches rather than all at once. The reason for this is that some plug-ins are not going to work, and introducing a small number at a time makes it much easier to weed out problematic ones.

After the configuration program has finished, all that remains is to quit it and launch Pro Tools. Converted plug-ins appear in the normal RTAS plug-in list, available at insert points in audio tracks, and also aux inputs on LE systems. Adapted plug-ins are to easy to differentiate from the others as their names appear with the prefix 'VSTW', which tends to clump them at the bottom of the list. Pick a plug-in, and hold your breath. With any luck the plug-in will pop up looking for all the world like it's perfectly at home in Pro Tools. As well as having full use of Pro Tools ' standard Save and Load preset functionality, the VST preset system is available at the bottom of the plug-in window. Automation is also implemented.

Now you're probably thinking there must be a catch with all this, right? Well, that depends on your expectations. There is a certain amount of uncertainty in using the adaptor (as you might expect), which means that you need to approach it with a willingness to get your hands dirty, and without expecting it to work with everything. There are certain technical differences between the RTAS and VST formats that are hard to reconcile, such as RTAS's lack of support for multiple outputs from a virtual instrument. Also, the huge range of possible system configurations and plug-ins makes testing difficult, especially for a relatively small independent software house like FXpansion. Taking all this into account, I set aside some time to install a range of effects and instruments, a few at a time, and get a feel for what can be expected. I downloaded around 40 free and demo plug-ins to add to my own. You can see a summary of my results in the 'Tested Plug-ins' box below.

Adapted plug-ins appear in the standard plug-in list with the prefix 'VSTW'.To begin with I was using an Apple iBook 800, running OS 10.2.8 with Pro Tools 6.1 and a Digidesign M Box, and had about a 50 percent success rate. This, I later learned, was an unusually poor result caused mainly by my Mac. Even so, many VST Instruments worked fine, including some large and demanding ones such as Gmedia's Oddity and ImpOSCar. Internal MIDI functionality worked fine, with the plug-in instruments automatically seen as destinations in MIDI tracks. One thing that didn't work in this configuration was tempo sync with Pro Tools ' timeline, though this turned out to be one of the things that improved when I updated to Pro Tools 6.2.2 (see below). 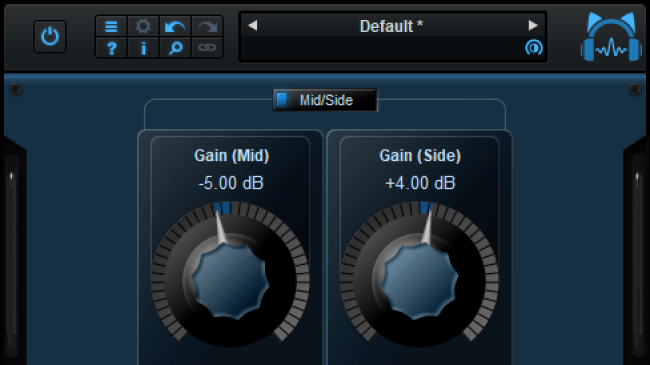 Failures tended to fall into two categories. Some plug-ins, such as Bitshift Audio's Phatmatik Pro and Linplug's RMIV, would crash immediately upon loading (or shortly thereafter). A number of other plug-ins appeared stable, but had graphics problems that rendered them unusable. This category included the huge MDA collection of free effects. Strangely, these plug-ins had worked with an earlier beta version of the adaptor that I'd been testing, so I suspected something was amiss. FXpansion suggested that I really ought to be running Panther (OS 10.3) and Pro Tools 6.2x, even though the published requirements are OS 10.2 and any version of PT 6 — and after dutifully upgrading, most of the problems I had did indeed disappear.

It actually turns out that some minor filing system corruptions on my hard drive had been preventing the FXpansion installer from installing some supporting files, causing my graphics problems. Unfortunately, instruments that had caused crashes like RMIV were no better after the upgrade, and obviously fall into the category of stuff that's just not compatible at the moment. However, everything was suddenly faster, more stable, tempo sync started working, and my success rate was up to at least 80 percent. Also on the positive side, FXpansion can be seen to be actively involved with the on-line user forum, and if a particular incompatible plug-in is popularly requested there's a good chance that they will look into updating the adaptor to accommodate it.

VST plug-in performance tends to vary widely even in native environments due to differences in programming quality, so it's difficult to judge how transparently VST To RTAS Adapter does its work. Testing with the ImpOSCar and Novation V-Station instruments, performance was only marginally weaker in Pro Tools compared with using unwrapped versions of the plug-ins in Cubase SX, and to be frank I'm tempted to put this slight difference down to Pro Tools 6 LE itself, which seems to struggle a lot on less-than-cutting-edge systems.

Inevitably, there are glitches here and there. Although upgrading to PT 6.2.2 got tempo sync working in most plug-ins, it was still a bit flaky in others such as PSP42. My review version (1.02) had a bug where automation would only get played back for plug-ins whose window was open. I'm assured this is now fixed in version 1.04, which came out as the review was to be filed. Other points conceded by FXpansion are lack of support for control surfaces such as Digi 002, no delay compensation, and the performance limitations imposed by RTAS's fixed 32-sample buffers. However, Pro Tools LE does have plug-in delay compensation up to a point, and this worked perfectly with wrapped plug-ins on my system. I also suffered no worse audio break-up problems with Pro Tools than with Cubase, so the small buffers don't seem to be an issue even with very demanding instruments. One issue I did encounter with the CM instruments was that the sound would cut out while adjusting on-screen controls. Apparently this can be a symptom of low CPU power, although I didn't have this problem with any other plug-ins.

An exciting development in recent versions, which is enjoying continued special development, is compatibility with certain DSP hardware products. Incredibly, the adaptor can wrap plug-ins that work with TC Electronic's Powercore and Universal Audio's UAD1, allowing you to use these DSP-accelerated plug-ins in Pro Tools, which must be ruffling a few feathers at Digi HQ! DSP support is at a preliminary stage, and the performance is not as good as when using these plug-ins in their native environments, but early reports sound encouraging. There is the problem of latency in these systems which Pro Tools can't adjust for automatically, but it can at least report the delay time (as with TDM plug-ins), allowing you to nudge audio to compensate.

Technically, VST To RTAS Adapter is quite an achievement, and politically is one up for the consumer (remember, those people who fund the industry) against the large manufacturers' format wars. If my tested plug-in list is anything to go by, the adaptor works with the majority of VST plug-ins out there. Where it does work it's remarkably transparent, doing all the things you'd expect from a real RTAS plug-in. There are plug-ins that just don't work, so if you are thinking of buying the adaptor in order to use something specific, you should check out the compatibility first. The best place to do this is the online FXpansion forum at www.kvr-vst.com.

There are other things you should consider before making up your mind. You should expect a certain amount of tweaking and experimentation to get a stable working system. I went through my share of crashes in the early stages, including several occasions where I had to strip out all Pro Tools ' settings files to get up and running again. You need to be prepared for this possibility. Also, the fact that you are introducing potentially unstable third-party plug-ins into the system means you should think twice before installing this stuff in critical situations such as professional recording or mixing sessions. However, for writing, sound design or home Pro Tools studios it really is worth any inconvenience. Mac os x 10.12. With all the free instruments and effects VST To RTAS Adapter makes available, I can't think of another way you could spend this little money and get so much extra gear.

Successfully converts most VST and VSTi plug-ins into working RTAS versions, opening up a whole new world of goodies to Pro Tools users. While it doesn't work with everything, and needs some technical competence to manage, you get big rewards for your efforts.